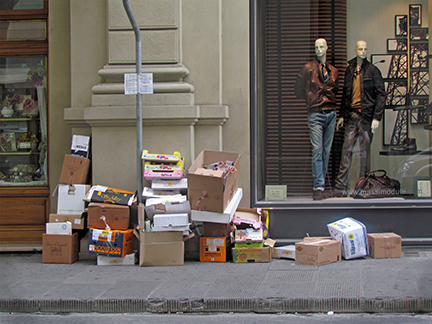 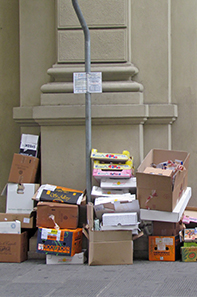 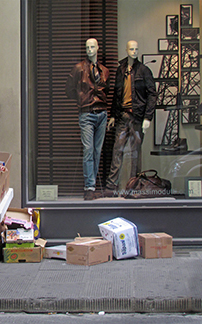 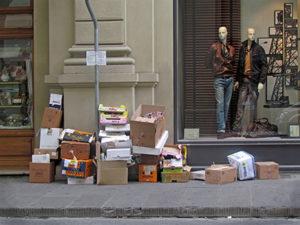 In an article for event producers about planning a conference and selecting the right speakers to match their audience, the focus was ‘content’ vs ‘context.’  Content is what is said or presented (the information), and context  is the surroundings or circumstances in which the content is delivered.

Street shooters apply this to the imagery they capture both consciously and subconsciously. They may frame a photo that includes many visual elements and crop out what they deem unnecessary in post-processing. They may also crop in the camera (on-the-spot while shooting) by focusing on a specific portion of what caught their attention. 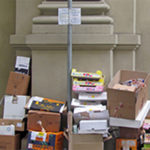 The benefit to taking an image with many visual elements is that in looking at the images later, you may discover an element that is more interesting than what caused you to take the photo in the first place.  In the photo “The Morning After,” I was intrigued by the casual stance of the mannequins in the window, who seemed to be observing the world around them. Coincidently, a pile of empty merchandise boxes lay just outside their reach which struck me as a great example of a visual oxymoron – a combination of contradictory images of the nicely dressed mannequins against the discarded empty boxes.

Another reason I considered this a good example is that the imagery creates at least three unique, stand-alone photographs: 1) the mannequins looking to the world beyond their display window; 2) the neatly stacked pile of empty boxes; 3) three haphazardly tossed boxes. 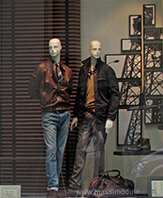 Cropping down to just the mannequins framed in the window is changing the context of the image. In the original image, the street is the context and the boxes, sidewalk, building, window, mannequins are the content. As a street photographer, I made the decision to merge unrelated imagery into a single frame to create a new reality.

In isolating the window, the display becomes the content of the window (context). As a stand-alone unit, the display window is someone else’s art and by shooting it, I become a documentary photographer or a photojournalist.

As a photojournalist, I’m shooting the moment in time and the story it tells. As a documentary photographer, I may be looking for a deeper or broader story about the current fashion trends and shooting display windows around the world to grasp the impact of their design presentation in influencing their audience.

The original photo “The Morning After” could be classified as street photography (quick unstaged glimpse); photojournalism (today in the city); or documentary (garbage crisis downtown).